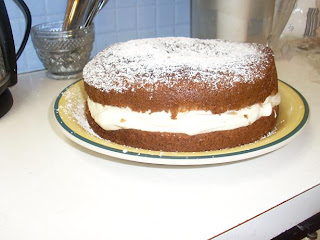 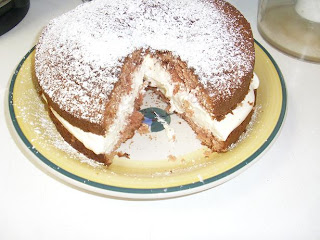 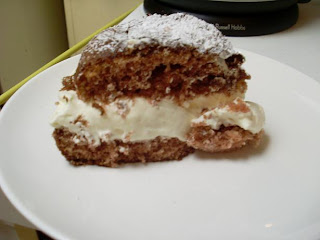 I haven't made one of these since home ecc classses in High School and let me tell you that's a veeeerrry long time ago.My sister Anne gave me the recipe for my grandma's ginger fluff sponge and I killed it!! It was not light and fluffy like a sponge is supposed to be and resembled a stodgy madeira cake :( Off course after talking to Anne I realised I shouldn't have used the electric mixer as I beat all the air out of the poor thing! So I tried the other recipe she gave me and this is how it turned out.......way much better! Of course I've hidden the dip in the top of the cake (due to taking it out sooner than I should have even though I was following the baking time in the instructions) You should have seen my face when I saw it caving in!So next time and yes there will be a next time I'll turn the oven to 190 instead of 200 and time it for 30 min's not the 10-15 min's it had me baking it for this one.As you can see I loooove cream and I'm already taste testing it and let me tell you even with the dip in the top it certainly tastes like grandma's ginger fluff sponge :)
Now that I've gained some experience and knowledge in making sponges I'll try making my grandma's one again as she made the BEST ginger fluff sponge!!
Posted by barb's creations at 11:10 AM

Mmmmmm *Licking lips* here and just a little bit of a drool. Yummy

Looks aren't everything when it comes to cake - some that are the most imperfect shape taste the best ever! Enjoy
My word verification is 'chomp' - lol

Come on then share the recipe, my OH loves ginger!!!

LOL Barb is there enough cake on your cream? That just looks really yummy , light and fluffy. You will have to share the recipe now.

Hmmmm that looks good enough to eat. Who cares about a slight dip - make no difference to the taste.

barb's creations
I love all types of craft from quilting to crochet....wishing there were more hours in the day so I could craft more.